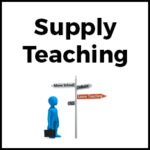 My first tip for anybody thinking of leaving teaching is “don’t give up on teaching yet!” Supply teaching may be a solution.

Doing supply gives you the opportunity to see a lot of different schools. If a job comes up in one then you may be at an advantage if you want to work at the school. Supply teaching also puts you in control by giving you the opportunity to apply for non-teaching jobs without having to give a term’s notice, which is often a reason why some teachers stay in a teaching job they hate.

If you’re using the experience to find your perfect school, then treat every day like an interview! Don’t return to schools you don’t like and make yourself known in those you do. And always have a few suitable standby lessons up your sleeve.

A friend of mine handed in her notice at a school I worked at on the first day back in September. She left at Christmas and then started supply. She said,

“I have experienced a couple that were worse, but the vast majority are a definite improvement.”

It gave her the opportunity to find a good school and she recently commented,

“I’m very happy with my role at the moment and have no plans to move.”

Unlike many other people, I took a break from teaching of over a year before doing any supply teaching. That made it a little more difficult because there were lots of checks that had to be done before I could teach, in addition to the Enhanced DBS. I had to get references from several people in schools I had taught in and some of those had since left which meant I was doing a lot of chasing after people.

Eventually, I was cleared for teaching and was able to do supply work in both primary schools and secondary schools. The rate I was on was £130 per day, which I negotiated due to my experience. Do not believe any advertisements from supply agencies offering “up to £200 per day“. It worked for me because I was already doing other part-time work for one company two days per week and so I had a guaranteed income for that job. I had another job running my own business and, if I didn’t get enough work in, the supply teaching was an additional source to supplement my income.

Many people going into supply teaching are relieved at the lack of planning and marking. In secondary, I was able to leave at the end of the school day, shortly after 3:00pm in some schools, without having to do any marking. However, I discovered that in primary schools there is an expectation that all marking is completed by the end of the day, which was 4:30pm in most schools I did supply in. I observed some of the most ridiculous marking policies, involving 3 or more different pen colours, which made that extremely difficult to achieve.

In my experience, some schools were good and some were awful. But I was in control… if I didn’t want to go back, I didn’t have to. The worst thing was that I couldn’t guarantee that I’d have work. Some days I didn’t get a call.

Nevertheless, Monday 6th March 2017 was the day I vowed never to set foot in a school again after being sent on supply to the worst school that I have ever been to, an Academy based in South Staffordshire. In the last lesson, I called for support as some pupils were ripping pages from text books. One member of staff entered the classroom to take a lad to detention. The lad refused and told them to f*** off. Again, I asked them for support. Shortly afterwards, a Deputy Principal entered the classroom and even she had difficulty calming the class down.

Later, another person entered the classroom with a visitor. I thought he was there to speak to the class and maybe take someone away. He had a smug grin on his face as they stood for him. He didn’t say a word; he merely smiled at the visitor and then left. His only reason for being there appeared to be to show off to the visitor how he could get the class to stand as he entered the room. He was the Principal.

Pros and Cons of Supply Teaching

Here are some comments from others regarding supply teaching:

“I jumped ship at Christmas and have been on supply since while I look for something that doesn’t involve working in schools. Pros are that it is flexible and interesting to get an insight into different schools. Cons are the variation in daily pay and you have to plan carefully to cover holiday season. One of my agencies gets very little work for me but releases holiday pay if I haven’t worked for a couple of weeks. The other one rings almost every day! Also be very wary of being ripped off by agencies. I found my daily rate was £20 less than another member of supply despite same agency and being more experienced.
If you’re still working in schools, ask supply staff there for recommendations for agencies to approach.”

“Have only been supply since May having left my previous job of 16yrs but here’s what I’ve found.

Cons:
1) work has dropped off now that y11 and 13s have left so jobs not guaranteed. You have to budget your money.
2) quite a few schools will only pay cover supervisor rate if daily cover which is less money.
3) One school seems to like to employ either 10-3.30 or 9-2.30 thereby claiming its not a full day and paying an hourly rate instead – quite a bit less.
The staff I’ve covered tend to be the ones with bottom sets and behaviour issues (no surprises why they’re off).

Pros:
Some lovely welcoming schools and staff.
Variety – you don’t get bored teaching same thing.
If you really dislike the place you don’t have to go back.
Planning and marking are not an issue on daily supply so no workload issues.
You don’t have to be scrutinised to an inch of your life.
I HAVE MY LIFE BACK -TIME WITH MY FAMILY AND FEEL HAPPIER AND HEALTHIER. My husband said, “I finally have my wife back!””

“My experience was that I enjoyed ‘daily supply’, but the assignments were patchy. To guarantee work, I was forced to take long-term contracts, involving ALL if the responsibilities, pressures and stresses if a permanent post, but without the benefit of holiday pay it pension contributions – at the end of my final supply year, I’d taken home 17K: not worth the long hours and stress at all!”

“Such I have been doing supply since January. Beware – some agencies promise amazing jobs that after you have signed up (often no-where near where you live) it turns out the job didn’t exist. Supply agencies want lots of teachers on their books – so put out random/generic jobs. Don’t get your hopes up. However, other agencies can get you week long posts. which is nice. I still do a bit of planning and marking, but if the school is not for you – it doesn’t matter as it doesn’t effect you. I like listening to unhappy staff in the staffroom and then walking out the door at 3.30pm. However the pay isn’t great and I miss being part of a team and building relationships with students. Pro’s and con’s – but if you are at breaking point like I was, it does allow you to step back and enjoy teaching again.”

“Primary supply was great 10 years ago. I gave up full time in 2006 and my first 4 years supplying were absolutely fab – I got known at half a dozen nice schools with plenty of work, covered classes regularly where ASTs were out at other schools once a week, enjoyed all the fun bits of teaching without the stress and got paid an hourly rate that was comparable with my UPS2 pay grade. Then my council sold the council-run agency to a private company -which they themselves set up to outsource everyone who worked on a casual basis for the council. We got a month to decide whether to sign up to the new ts and cs or leave. The unions weren’t interested as supply teachers haven’t signed a contract and the council were therefore not in breach of contract. Our pay rate was cut (mine went down by £7.50 an hour), our automatic pension contributions stopped and our right to free CPD disappeared. And to add insult to injury, after a year the new company proudly announced to everyone that they had made £20,000 profit!! With whose money…?! Not long after that, the work began to dry up too… partly as this all coincided with the abolishing of the AST scheme, a big reduction in school-time CPD and the increasing bad-practice habit of using HLTAs to cover classes. I was more fortunate than some as I had a couple of great schools who kept giving me work because they valued my experience, but after a couple more years I’d had enough and I jumped ship to a completely different job. I’m now working in heritage and earning less, but I am so much happier. I’m fortunate that my other half is well paid so I could afford the pay cut, but with the dwindling amount of supply work available, the teaching was paying me less and less each year anyway. I would not presume to advise, but if you decide to go for supply then talk to other supply teachers in your area first and ask them about the pros and cons.”

If you’re thinking of leaving teaching then the Thinking of Leaving Teaching Group might be a good place to get some ideas. It is a safe place for people to ask for help and advice, discuss topics and share opinions about jobs you can do if you leave teaching.