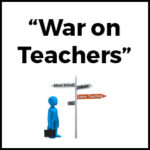 As an ex-ICT Head of Department, I can still hardly believe the damage that Michael Gove caused to the teaching of ICT and to education in general. He is infamous for his ‘war on teachers’ during his time as Secretary of State for Education. However, it amazes me how utterly incompetent he was in that role.

Gove scrapped the ICT curriculum to introduce new courses of study in computer science because he said children were “bored out of their minds being taught how to use Word and Excel by bored teachers”. Back in 2012, he said that he wanted to see new “rigorous” computer science courses in schools.

At that time, I was teaching successful ICT lessons in Flash Animation, Video Editing, Digital Photo Editing and Web Design despite not having a degree in the subject. However, I knew the days were numbered for my subject when Gove quoted from the DfE document, School Workforce in England: November 2011, that only 26.4% of ICT teachers had a relevant degree or higher.

Despite being Head of the ICT Department, I found myself in that category.

In 2014, the government introduced its new computing curriculum but it was all very rushed, with little thought put into the implications; the training that would be required, for example. The new curriculum was criticised by many as being too focussed on coding with many arguing that ICT was still important and that there was room for both computing and ICT in schools but Gove’s narcissism meant that he was never going to listen.

It took until 2016 to discover that ICT teachers were struggling with the transition to computing (https://schoolsweek.co.uk/teachers-lack-confidence-in-comp…/). The BBC reported the following year, in November 2017, that more than half of England’s secondary schools, 54%, did not offer GCSE computer science. What a cock-up!

In April 2018, it was reported by BBC News that an academy trust could close its design technology and computer science departments in a bid to save £385,000 a year. Despite Michael Gove saying that he wanted to see new “rigorous” computer science courses in schools, what we were actually seeing was a school removing ICT and computing from the curriculum! The following month, the Schools Minister, Nick Gibb, announced a boost to computer science teaching. I left teaching in 2013. It had taken five years to recognise that teachers needed support to teach pupils skills such as coding, computer programming and cyber security.

My pupils’ IT skills are appalling and it’s our fault. And the fault of a ridiculous ‘computing’ curriculum.

Nevertheless, despite the announcement of a boost to computer science teaching, in May 2019 BBC News reported a study by the University of Roehampton which had found that computing in schools was in ‘steep decline’. It said schools had cut back on the hours spent teaching the subject, with the number of hours of computing taught in English secondary school classrooms falling by 31% between 2012 and 2017.

GCSE results in 2019 showed a drop of more than 40,000 in the numbers sitting for a qualification in either computing or ICT. Following the GCSE results, a BBC article asked, “Why are pupils switching off from computing GCSE?” It also showed a growing gender gap, with boys outnumbering girls by more than three to one in choosing to take the subjects. The evidence was that many schools were struggling to find the teachers needed to tackle these qualifications.

In September 2020, in a BBC article called “Women in computing – there is good news and bad“, the bad news was that the latest GCSE figures showed the number of girls getting any kind of computing qualification at school had continued to decline. The author referred to what they had mentioned before about the replacement of the “information communication technology”, or ICT GCSE, with the far more rigorous Computer Science. That has led to the unintended consequence of reducing the number of 16-year-olds – and particularly girls – getting any kind of computing qualification.

With the pressure that teachers are under due to Government-imposed accountability measures, I am astonished that Michael Gove was allowed to get away with this. But such is the way with politics… do an awful job and you either resign, get moved to another department, or continue to “fail upwards”.

In the end, David Cameron removed Gove from his job and his successor, Nicky Morgan, then issued orders to stop Gove’s war on teachers.

Gove’s war on teachers and his destruction of the ICT curriculum most certainly qualifies him for the Ofsted grading ‘Inadequate’. Thank God he didn’t get to become Prime Minister!