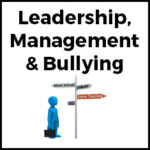 In my experience and that of many other teachers, good leadership and management are, unfortunately, not common in teaching. This is sometimes due to the fact that most teachers are simply promoted and expected to get on with it, managing people having had little or no training. However, this can also lead to unprofessional behaviour and bullying.

Bullying as a result of poor leadership and management

One way that this unprofessional behaviour and bullying rears its ugly head in teaching is in the observation process. A member of senior management observes a lesson, decides much needs to be improved and then puts the teacher on a “support programme”. I know of some teachers who have suffered from depression as a result of continually poor and unjustified feedback, and many others have been “managed out” after been put on such “support programmes”.

Experienced teachers left with no choice but to accept redundancy as they are pushed down occupational health route or told they will face increased workload, reduced breaks/lunch hour and endless observations/ learning walks. #demoralised @No2Academies @school_hands @cyclingkev

I first began feeling stress as a teacher after ten years in the job due to bullying at work from my line manager. What I started to do in an attempt to relieve my stress was start smoking! I now realise that what I should have done was regular physical activity such as walking, jogging, swimming and cycling (people also suggest mindfulness and meditation).

After a couple of years, my line manager was promoted into the leadership team, which removed a lot of my stress. I gave up smoking and didn’t think about leaving again until Gove started his war on teachers in 2010, workload increased, and then a new Deputy Headteacher arrived whereupon things became unpleasant once again. One sign of the change was the high turnover of staff.

To put things into perspective, I’d been teaching at the school for fifteen years. I was top of the Upper Pay Scale and my lesson observations had not been graded less than “Good”. Then, one of my lessons was observed by two other teachers from an “observation team” set up by the Deputy, neither of whom were specialists in my subject. As a result of their feedback, in which I was given a “Satisfactory” grade (which became “Requires Improvement”), I was put on a “support programme”. Despite vehemently disagreeing with the observation feedback, the grade stood so I knew where that was leading.

The following observation feedback, that I received back in June 2011, is from that Deputy Headteacher and shows how some senior managers can abuse their positions. The observation was totally unnecessary as I had already handed in my notice and would be leaving the school in six weeks’ time. My Union Representative agreed that, had he not seen the “Satisfactory” at the bottom of the written feedback, he would have thought it had been an “Unsatisfactory” lesson.

In the “Summary of Areas for Development” the Deputy Headteacher wrote “Students who arrived early 11.37 sat waiting for at least 7 minutes.” However, what they failed to mention in both the verbal and written feedback was that during that time at the start of the lesson there was so much shouting and screaming from pupils waiting outside my room for other classes that I had to go outside to tell them to be quiet, stop messing around and to get to their lessons. It was also the cause of the delay in pupils getting to my lesson. I was amazed that, during this commotion, the Deputy Headteacher remained seated instead of going outside to sort the problem out, and when I arrived back in the classroom the Deputy Headteacher was still writing furiously.

My Head of Department told me that the Deputy Headteacher saw them afterwards to ask about marked coursework whereupon they were shown both my perfectly up-to-date marksheet for that class and the marked coursework. This was not updated on the observation feedback.

What is very interesting, though, is the very positive feedback that I received from the pupils for that lesson. “I thought the lesson was really good”, one commented. Several referred to the website I had made to guide them, which contained tutorials that I had created for the tasks they were doing. My website resources weren’t even mentioned in the feedback as a positive aspect! It seems rather extraordinary that the pupils observed positive aspects in the lesson (for example, “When we didn’t understand something, the teacher didn’t just try to explain to us with only words, but also used props to help us understand more. This helped me a lot.”), and yet the Deputy Headteacher failed to mention any of them in the written feedback.

The Deputy Headteacher became Headteacher of the school a couple of years after I left. In January 2019, the school was one of those listed in the Birmingham Live article, “Revealed: Birmingham’s worst secondary schools – is YOUR child’s on the 2019 list?“. The Headteacher was allegedly managed out that year.

We need to distinguish between where an individual response of not enjoying a workplace ends and where a toxic work environment starts, writes @HelenWoodley https://t.co/Ykoxw9UWLD

In my last six months as a teacher, I decided to study ‘Leadership and Management’ as I was told this would be useful to me in the ‘real world’. It was only when I decided to begin studying this that I realised how important it was. One of the earliest management theories was McGregor’s Theory X and Theory Y and that was the first management theory that I looked at.

Theory X managers have an authoritarian and controlling style of management. They assume that the average employee:

This management style leads to mistrust, highly restrictive supervision, a punitive atmosphere, threat and intimidation to gain employees’ compliance to work towards organisational objectives. Theory X managers will do the thinking and planning with little input from subordinates.

Theory Y Managers are democratic and empowering. They assume that the average employee:

This management style helps people to develop and encourages them to take the initiative. People will contribute more to their job and organisation if they are treated as emotionally mature, responsible and valued employees and are given challenging work.

Theory Y managers are accepted as being more effective for motivating people than Theory X managers and tend to achieve the best results from their teams. Businessballs.com lists the behavioural characteristics of an autocratic Theory X manager. Some of those are listed here:

I was quickly able to identify some of my previous managers as Theory X Managers, and I’m sure you will also recognise some of those behavioural characteristics in some of your managers. In this example, this person’s headteacher is clearly in this category (the headteacher sent the email to staff on a Sunday, the last day of the half-term holiday):

Argh! HT has emailed today to say there is a SIP learning walk tomorrow focussing on differentiation and spelling and could we please send all planning for English and maths by end of today. I wish this was a parody account ??‍♀️

Situational leadership is a style that was developed and studied by Kenneth Blanchard and Paul Hersey and was published in their 1982 book, “Management of Organizational Behaviour: Utilizing Human Resources”. A more recent book, published in January 2015 by Ken Blanchard et al. is “Leadership and the One Minute Manager (The One Minute Manager)”, which several friends of mine were required to read as part of their management courses.

Situational leadership refers to when the leader or manager of an organisation must adjust their style to fit the development level of the team members they are trying to influence. The model defines four leadership styles: directing, coaching, supporting, and delegating.

A coaching management style combines both high supportive and high directive behaviour. This style is ideal to use for employee development. It provides the employee with clear direction but also allows the manager to provide support in order for the employee to become a master at their job. In teaching, I have worked in a school that attempted to introduce coaching. In reality, it failed because it was very time-consuming and required the teachers and their managers to be off timetable at the same time as each other. That time was not provided, requiring the teachers and their managers to arrange time to see each other before and/or after school.

A supporting style has a low level of directive behaviour, but a high level of support. The manager actively participates with the employee and can involve the manager working alongside the employee. This style provides support to an employee without telling them to do their job and is useful for a fairly experienced employee who may need a moral boost.

A delegating style is low in both supportive behaviour and directive behaviour. This style is the ultimate preference for managers who want to give their trusted employees autonomy and build their skill set. In teaching, this style would be best used for experienced teachers, such as Heads of Department or teachers who have had an area of responsibility for some time.

Problems begin where the wrong leadership style is used. Examples in teaching could be:

In my last six months as a teacher, I also started learning about the Myers-Briggs Type Indicator (MBTI). I found this very interesting and talk about this later on in the Job Search section on Jobs and Personality Profiles.